One of the most distinctive and common birds in the plantation is the Greater Caucal (Centropus sinensis). These dapper birds, with jet black bodies and russet wings, resemble ungainly crows but are actually a member of the cuckoo family. I often see adults foraging for insects among the palm fronds or on the edge of the road as they flap sluggishly out of the way of approaching cars.  The nests are much harder to see, and I’d not known where these were built until this week. 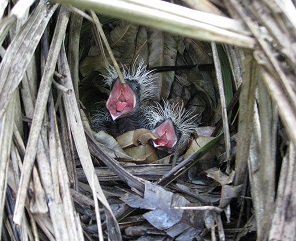 While laying out tape measures to mark the plots, we were disturbed by a wheezing and hissing sound coming from a dense mass of ferns and old fronds. Closer inspection showed that the thicket contained an extremely well camouflaged caucal nest, with several plump feathery babies inside. The nest itself was constructed of dried palm fronds, which had been bent round to form a hollow sphere. The resulting cup was lined with finer fern leaves on which the babies sat. As we looked in, they began wheezing even more loudly, as if on the verge of an asthma attack, opening their beaks to show salmon-pink mouths and tongues. After taking a photo, we carefully moved away from the nest and pushed back the surrounding herbage. As if by magic the noise stopped and, without knowing exactly where to look, the nest merged seamlessly into the surrounding vegetation and disappeared. The location of this nest in the understory goes the show how important maintaining this part of the oil palm can be for plantation species.