I’ve just arrived back in Sumatra for my second data collection trip, this time concentrating on the insect communities found in the BEFTA plots. The study has been designed so that the BEFTA team has a year to collect data from all the plots before the experiment is implemented, strengthening the conclusions that can be drawn from the study. We are using two main collection methods to survey for insects this trip – a combination trap to collect a range of understory species and a transect walk around the plot and along the road edge to record dragonflies and butterflies.

This week we began setting the combination traps here for the first time. These are based on a design originally used in the Stability of Altered Forest Ecosystems (SAFE) Project in Borneo, but built by the staff here in the research centre. These traps consist of three main collection techniques rolled into one. At the top there is a funnel with a fabric ‘mini-gazebo’ inside which acts as a small ‘malaise trap’ to catch any insects which fly upwards and funnel them into a bottle of alcohol attached to the top. The middle section is made of two interlocking plastic sheets, which act as a barrier to any flying insects.  Insects that fly up when they meet this barrier are trapped in the fabric funnel, while those that get knocked down, find another funnel leading to pot of alcohol at the base of the trap. Finally, the trap is set so the rim of the bottom funnel is flush with the ground. Any walking insects will therefore fall into this and also be caught. There really is no escape from the SAFE trap! 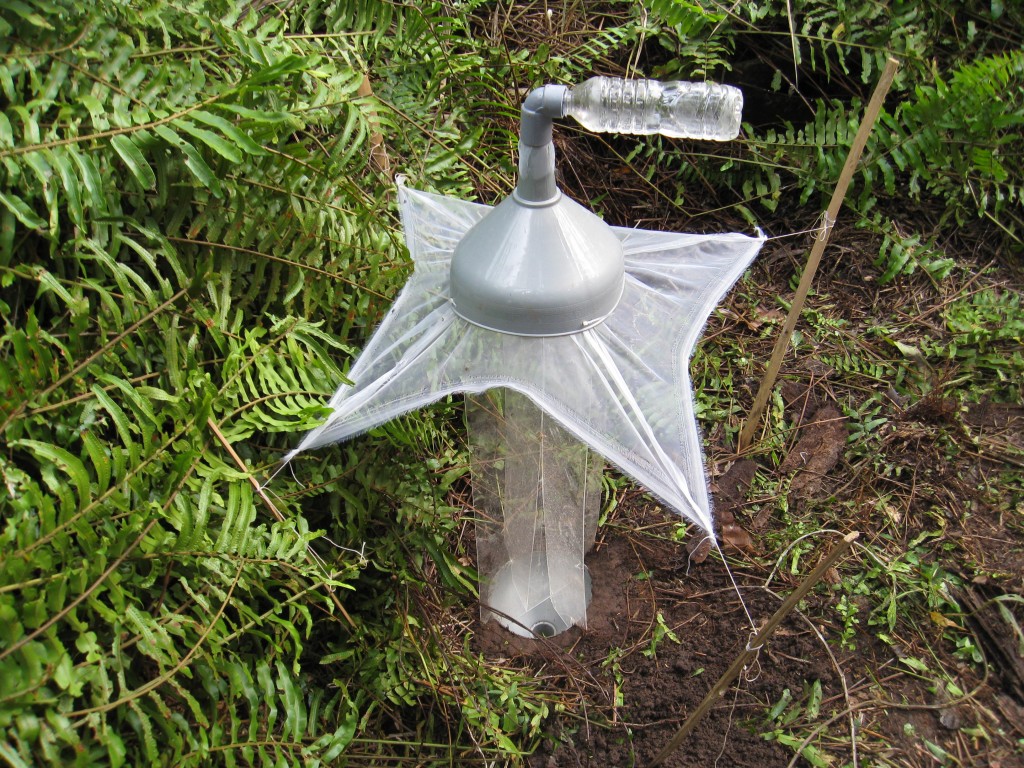 Although the first set of traps have only just been collected, it is clear that they are working well. Not only are a wide range of different insect groups being found, but the traps are also relatively easy to set in the field. By using the same trapping locations in each plot (three traps per plot, 50 metres apart) time after time, we will be able to quantify subtle changes in both the insect communities in each area and across the plot as a whole. The spatial distribution, as well as the trap design is also comparable with the SAFE Project, meaning that results from the two areas can be compared.