research Setting up the plots

Setting up the plots

Over the last month, the BEFTA team has been working hard to finish surveying and setting up the plots. This is now complete and marks the end of the first, and perhaps most-important, stage of the project. Key to this was choosing areas that were similar to each other in term of their slope and topography, so that changes brought about as a result of the experimental treatment are not masked by underlying differences between sites. In the first instance this involved using existing maps of the plantation to select estates that were of similar age and topography, and the same height above sea-level. We then drove through these estates and excluded any areas that were unsuitable (because of the proximity of villages, for example). Within the remaining areas, we then selected our sites at random from the established plantation harvesting blocks – thereby ensuring an unbiased sample, within the constraints we had set.

Each of these areas contains three adjacent plots of 150 by 150 metres in which the experimental treatment will be applied. At the centre of these are smaller 50 by 50 metre plots in which the actual surveys will take place (therefore buffered from the surrounding plantation by the rest of the plot). To establish these in the field, we used GPS units to locate the corners of each plot and marked them with large red and white plastic pipes. At the same time as the plots were marked out, we also recorded various other parameters, including the slope, the aspect, the vegetation height and cover at set points, the canopy cover at set points and the number and size of the termite mounds in each plot. This not only provides environmental information, against which other data can be assessed, but also allows us to check that the different treatments (randomly assigned to the plots in each area) do not differ significantly from each other by chance. In other words, we can test that the different experimental treatments start from an even playing field! Luckily none of the parameters we had recorded different between the treatments, so we are now ready to start the next phase of the project: actually collecting biological data! Huge thanks are due to the staff and researchers at SMARTRI for carrying out all the work necessary to set up the plots. They deserve an award (a BEFTA award?). 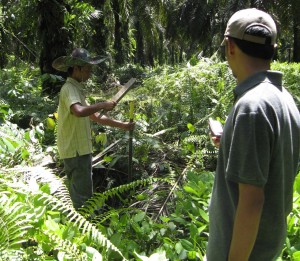 Two of the BEFTA team marking out the plots