The BEFTA team recently attended and presented their work at The European Conference of Tropical Ecology in Brussels. The conference was hosted by the Society for Tropical Ecology (formerly Gesellschaft für Tropenökologie e.V., gtö) – Europe’s largest tropical ecology society – and was attended by over 360 delegates, from 37 different countries. The theme of the conference was “(Re)connecting biodiversity in space and time”, and symposia topics included issues relating to traits, functions, genetics, animal behaviour, land-use impacts, and conservation, across a wide range of tropical biomes. 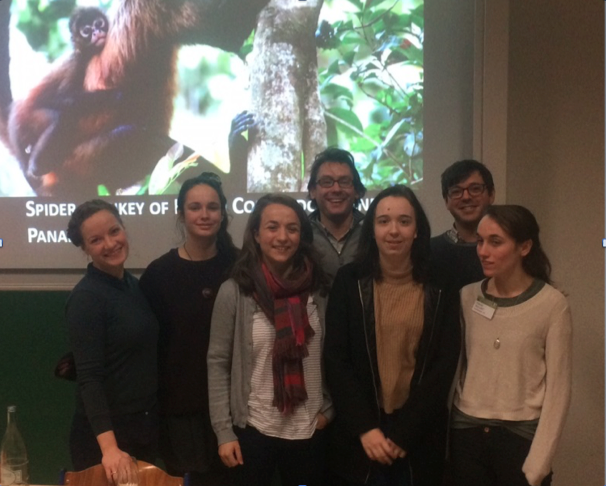 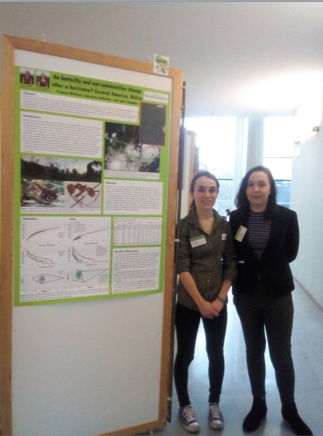 Frances and Georgina with their poster

Sarah began by introducing the topic of oil palm, and the need to strike a balance between the demands of production and protecting ecosystems. She introduced the BEFTA Project, discussing its aim of testing the effects of understory vegetation complexity in oil palm plantations on biodiversity, ecosystem function, and yield; and also explained the experimental design of the BEFTA Project (more information here: http://oilpalmbiodiversity.com/research/befta-project/). She then presented some early results looking at the effects of manipulation of the understory vegetation at BEFTA on canopy ants, caterpillars, and herbivory of oil palm leaves. Results so far suggest that oil palm ecosystems are more complex than we might think, with high variability over time, including in response to rainfall. No effects of understory treatments are yet evident on canopy communities, but there has also not yet been a drop in yield as a result of the treatments. It will be interesting to keep monitoring effects over time. 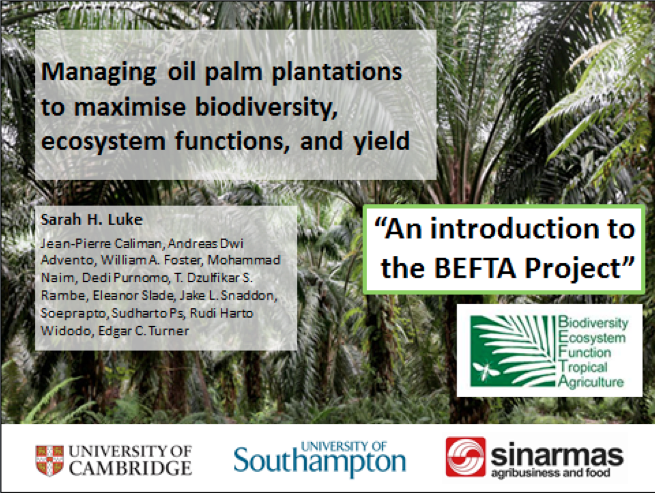 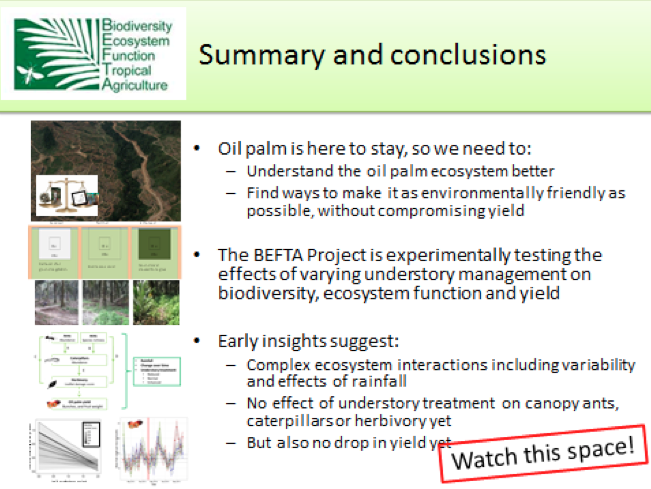 Ed was the next to speak, and took a closer look at the effects of the BEFTA understory treatments on predators within the understory. He presented findings of Cambridge Masters students – Dave Kurz and Dakota Spear – along with his work from the project. They found that there was lower frog, assassin bug, and spider abundance and richness in the understory of reduced complexity plots compared to normal and enhanced plots. This included lower abundance of large golden orb web spiders (Nephila spp) in reduced complexity plots, and a consequent drop in prey consumption across these plots. However, they found no difference in the diversity or abundance of ground or canopy spiders between plots with different understory treatments. Altogether this shows that having more complex understory vegetation helps to support a wider range of predators, which could be a key part of pest management within plantations. 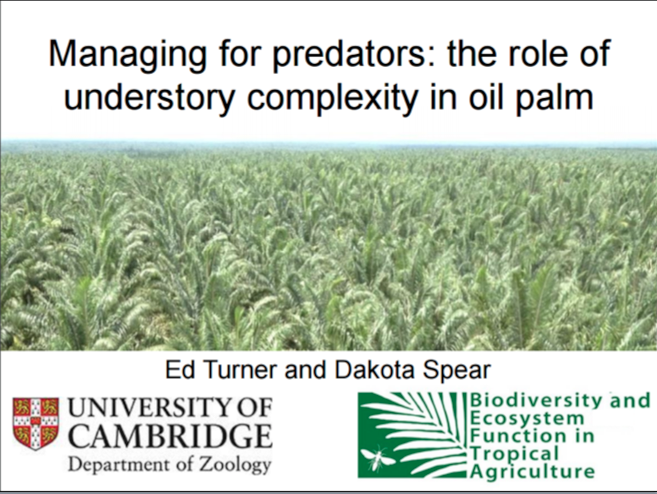 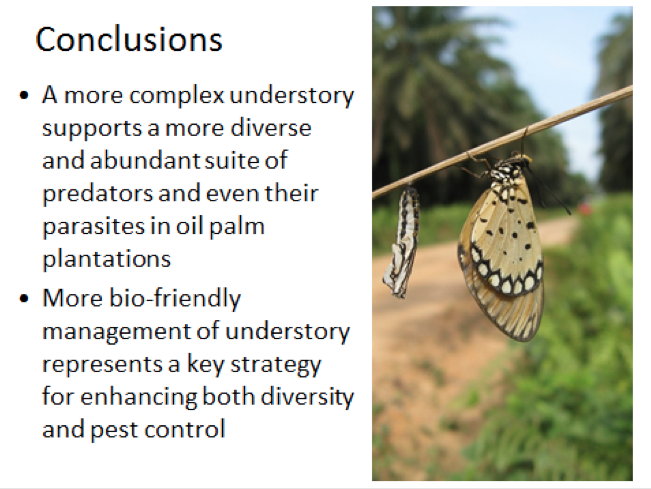 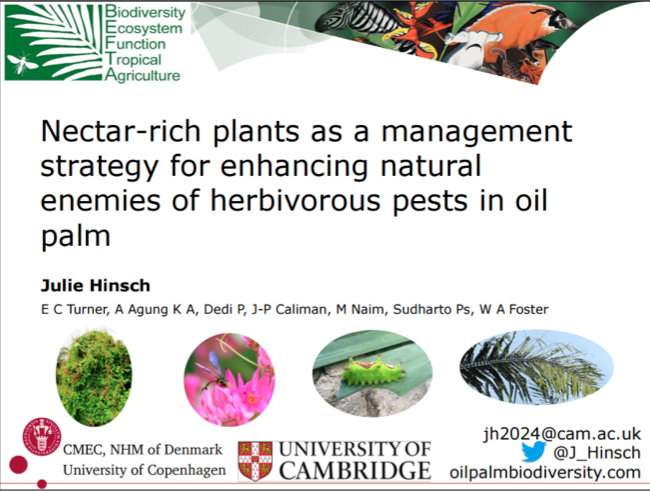 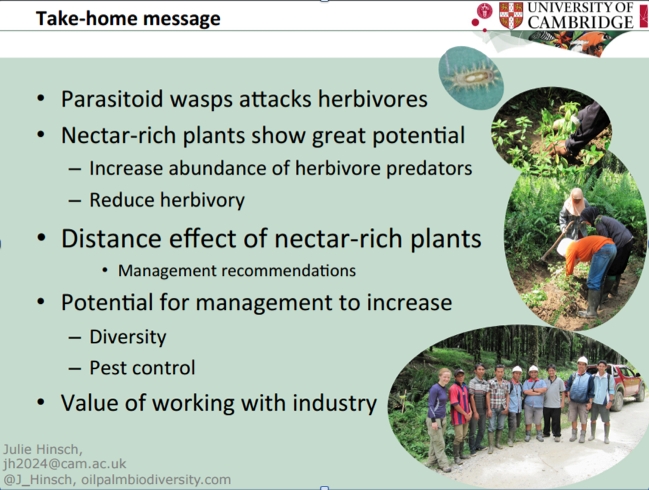 Alongside the above-ground work the team have collected data on how the BEFTA treatments and habitat complexity is affecting the below-ground biodiversity and processes. Jake presented an overview of this work selecting some results from Adham Ashton-Butt  and Hsaio-Hang Tao’s  PhD projects. Adham’s initial measurements of chemical and physical properties have shown that while soil nutrients change little across the sites, soil moisture is decreased in the reduced vegetation cover BEFTA plots. This impact on soil moisture is also apparent in the data from the replanted areas, which show that as the vegetation cover matures, soil moisture increases at the sites. To complement this, Hsiao’s work on the impact of empty fruit bunch (EFB) application on soil biodiversity and soil properties shows a positive impact of EFB on soil moisture, leading to a positive relationship between soil moisture under the EFB plots and oil palm yield. Work is continuing on the identification and analysis of the soil biodiversity from the plots, and it will be interesting to see how the diversity contributes to this system. 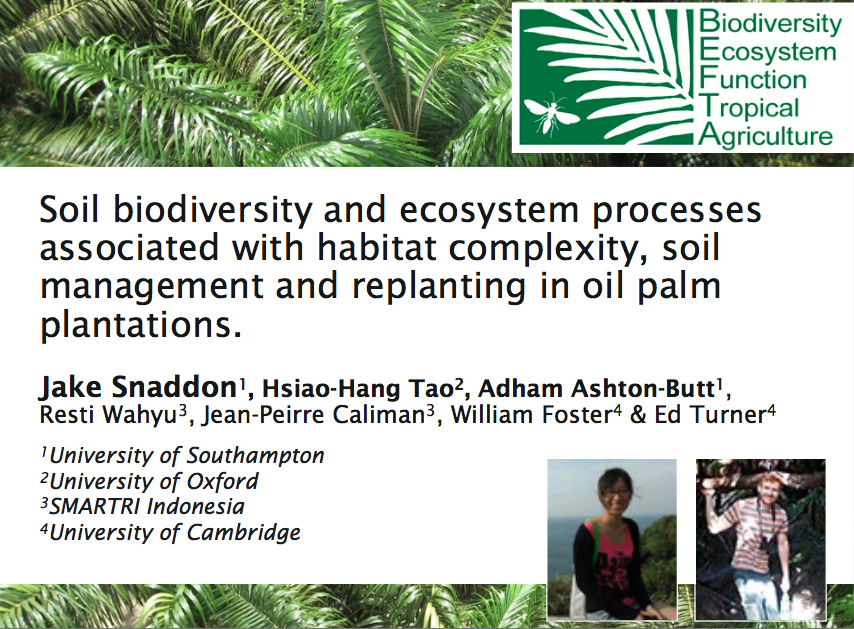 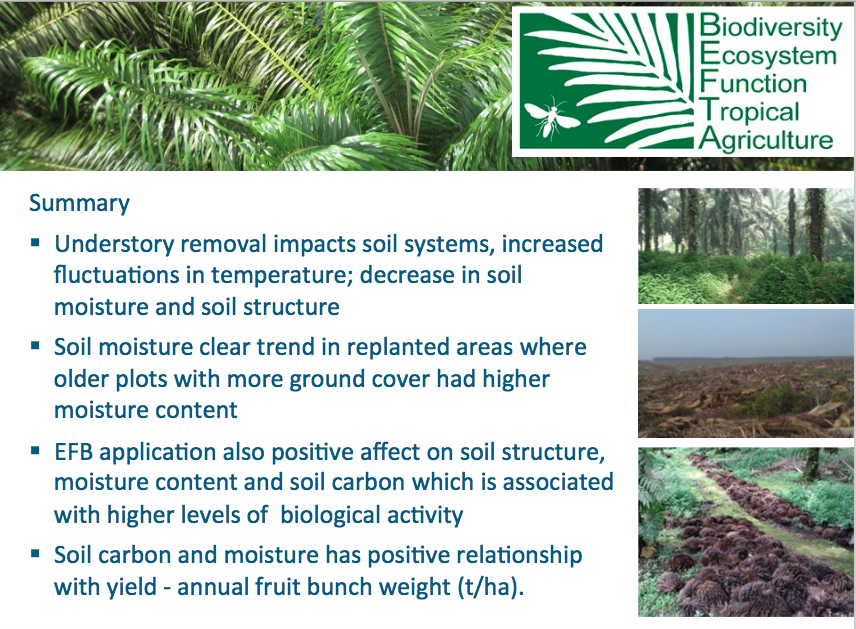 Millie continued the theme of below-ground ecosystem functions, presenting results on soil bioturbation and leaf litter decomposition from her PhD. She has found that oil palm plots that had been replanted, and currently have young palms growing (4 years old at time of study), had no termite mounds and lower rates of leaf litter decomposition compared to mature (25-30 year old) plantation. In the mature plantation, there were more active termite mounds and higher rates of leaf litter decomposition where levels of understory vegetation were higher. She also showed that herbivore abundance is higher in mature plots that do not have understory vegetation, and that herbivory is higher in replanted plots than in mature plots. By comparing a range of ecosystem functions, she was able to show that mature plots with enhanced or normal levels of understory vegetation are functioning more optimally than mature plots with reduced understory vegetation, or replanted plots. Millie plans to test these functions further by conducting ant and termite exclusion experiments, to assess the role of these insects in ecosystem processes within the plantation. 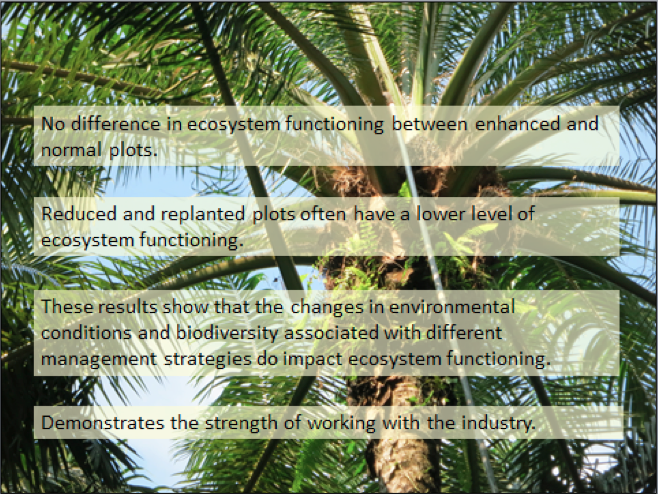